Ruby has appeared to have grown up rapidly over the summer holidays; some of her clothes are now starting to get a little bit small, so we have had to go and buy her some new ones; but what I have noticed more over the summer holidays is that she has grown in maturity, she is no longer my baby girl, she is now getting bigger, has opinions on what clothes she wants to wear and will not hesitate to tell me if she doesn't want to wear something. Is this giving me a glimpse of what living with teenage girls is going to be like?

Ruby has started to love anything that contains a Disney Princess and would love nothing more than to spend all day in the Disney store. I love taking her shopping, but we do have to look at absolutely everything in the store at least three times; I wish we had more money so I could buy her more, but we just don't and that is unlikely to change unless we win the lottery any time soon. 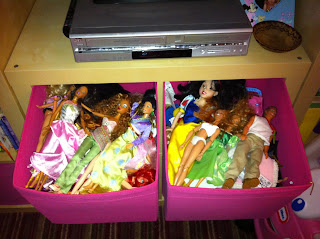 Recently my sister, Ruby's auntie, was having a clear out of all her old toys and kindly gave Ruby quite a few barbies; to be honest I didn't think Ruby was old enough to be playing with them and had intended to store them until she was older, however she loves them and plays with them all day every day without fail. The barbies even go outside and play with her and can often be found at night when its tidying up time, hidden in among the flower beds. Its so cute to see Ruby playing with the dolls and creating role plays, however there is that part of me that wants her to slow down so she does not grow up so quickly; I know this is purely selfish, but I worry that she will be so grown up in the blink of an eye and then moving out and getting married!

The weather really has been awful so far this bank holiday weekend with plenty of rain, so there was no way I would be venturing outside as I am only able to wear skirts or dresses as my knee is still too swollen to put on any trousers (if your wondered why my knee is swollen you can read more here), therefore we have spent the majority of the time inside, it has been a while since we last did any art and craft so I asked Ruby what she would like to do and she suggested we make princess tiaras!

As you can see Ruby had a great time and loves her tiara. 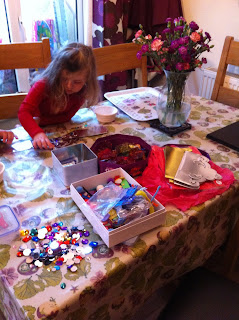 Here is the finished tiara! 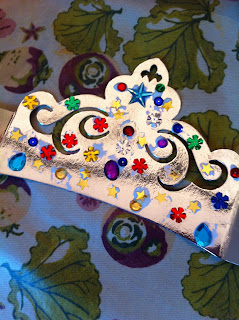