Despite it being summer, the weather just seems to be changing all the time, one minute it's lovely and sunny and we're eating ice lollies to keep cool and then the next it's tipping it down with so much rain.

Yesterday, I had planned for Ruby to enjoy some outdoor water play, well I did not really have to plan anything as she could have just gone outside in the rain instead. However I took the brave decision to move the paddling pool into the playroom, I would never had done this a months ago as I was paranoid about water getting everywhere and making a mess, but I have learnt to let go and just embrace whatever happens.

The evening before, I had found a ice cube tray in the shape of fish, so I filled it and added some sprinkles of glitter to give the some extra colour. 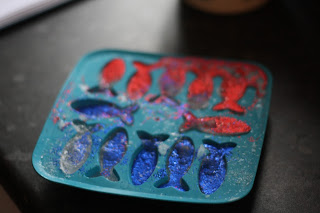 I filled the paddling pool with a couple of inches of water and told Ruby that she was going to go fishing and I went into the kitchen to get the fish from the freezer, when I returned Ruby had taken off all her clothes and was in the paddling pool! Ruby is guaranteed to be found near water, she loves it so much and this includes jumping in muddy puddles in her best clothes and new shoes! 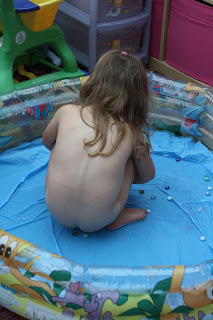 I released the fish into the paddling pool and Ruby was so excited to see all the different colours and instantly got to work at hooking them up in her net. 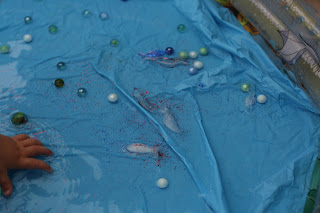 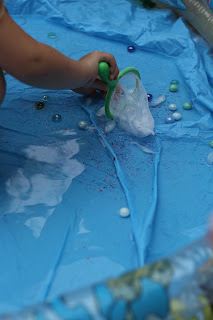 After 10 minutes of play the fish were no more, they had all melted away much to Ruby's disappointment, I must remember next time to make sure I do lots more. However this did not stop the playing as we added some marbles into the pool and she pretended that these were jewels and treasure. 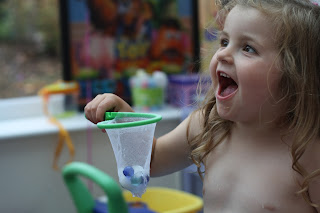 It proved very difficult to get Ruby out of the paddling pool and into bed as she just wanted to spend the time playing, so instead of having a bath she had one in her paddling pool, before putting on her pyjamas and going to bed.