A Cake in the Oven!

I'll put my hands in the air, I don't cook anywhere near as much as I should, I just don't have the confidence and worry about it all going wrong. I'm also incredibly lucky that my husband, Phil is able to cook better than most men, so he takes charge of most of the cooking, I do however bake cakes and all the nice sweet treats!

Phil has tried on numerous occasions to help me and so has my local BBC radio station who gave me a three hour intensive cookery class live on air, it was a fantastic experience and it was really good to have an expert on hand to help me out, it's a shame we don't have the money or someone near me who could give me some tips.

Eighteen months ago, Phil bought me what any cook would love. a lovely brand new Range Master cooker; I love it don't get me wrong, but I love it because of how it looks and not because of what I can cook with it and this really does need to change, I do really want to be able to cook.

Last week I watched Great British Bake Off, I had never watched it before but heard people talk about and how good it was, so I was determined to make some time to watch it and see if all the hype about it lived up to my expectations.

Within about ten minutes of the programme I was hooked, but saying that who wouldn't be with all the lovely cakes on show! I could easily have eaten a slice of each and every one and not feel any guilt at putting the weight on; I am desperate to put on a stone or two as I am actually deemed as being underweight and my BMI is too low for my height.

One cake that really stood out to me during the first show was a sponge cake with a rhubarb and custard filling, I absolutely love rhubarb, my mums grows it in her garden and very rarely uses it, so I ceased the opportunity to collect some rhubarb.

I have never made jam before, so I was quite nervous about how it would turn out; but I decided to give it a go. I'm the kind of cook who sticks to the same old boring things as I get scared of trying something new in case it does not work or I don't like it; but over the coming weeks I am going to challenge myself to do something new. 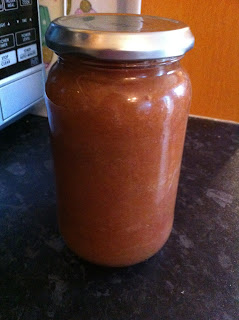 The jam was surprisingly easy to make all it took was 250g of rhubarb and 100g of sugar which were heated on a low heat and then simmered whilst stirring until the liquid evaporates and it starts to thicken up.

I then made a normal sponge cake; there seem to be so many different ways to make a sponge cake but I stick to a recipe that I use from a cookery book that my mother gave me. How do you make your sponge cake? 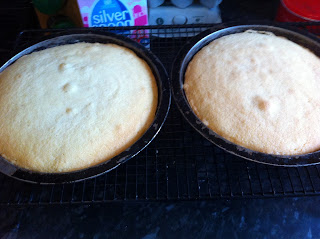 This is the recipe I use: Cream together 150g of caster sugar and 150g of margarine; mix in three eggs and   a couple of drops of vanilla essence, and finally add 225g of self raising flour and mix it until its all mixed together. Then bake in a preheated oven on gas mark 4 or 180c for 18-20 minutes.

I then made the butter cream thanks to a recipe from Jessie at the crazy kitchen. 100g Butter, softened, 75g pack of instant custard,125g Icing sugar, two tablespoons of milk and one tablespoon of vanilla essence. All I did was add the ingredients into a bowl and let the mixer do the hard work! It really was that easy!

I then layered the cake up with the jam and custard butter cream. 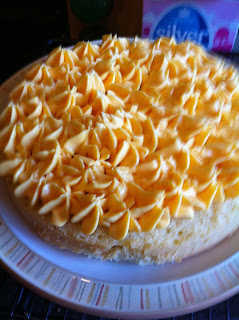 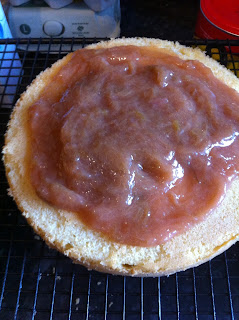 Here is the end result and I'm pleased to say it tasted delicious and I shall definitely be making it again. 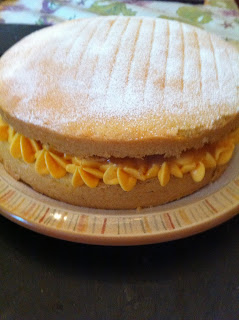