For anyone who is unaware, I have recently had an operation on my knee; you can read my pre-op blog post here. I had been incredibly nervous about it all and started to wonder how I was going to cope with the operation and the recovery; it's too soon to talk about recovery at the moment as I just need to let the bruising and swelling subside.


I wanted to take this opportunity to say thank you to the many people that messaged me and offered such wonderful wise words and support, thank you all so very much.

On Friday morning we dropped Ruby off at my mum's whilst Phil and Lottie took me to the hospital. As soon as I arrived on the ward I was was sent to the day room to wait to be admitted; after about half an hour I was starting to get really fed up and anxious and decided to leave the ward and go for some fresh air. I think the nursing staff must have sensed how nervous I was becoming as they soon came and fetched me and placed me in a room away from everyone else and with a TV.

A nurse then went over lots of forms with me and made all the routine checks; because I could not remember when I had my last period (they are very irregular because I am breastfeeding), she had to do a pregnancy test. The nurse went away to test my urine and Phil and I waited for the results knowing 99% that it would come back negative but there was still that very small chance and the wait for the nurse to come back with the results was painful; when she did we all breathed a huge sigh of relief! My consultant shortly arrived and went over what he was planning to do and said that it would not be too much longer as the theatre was nearly ready for me. 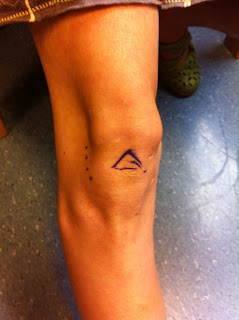 Next to see me was the anaesthetist and her assistant; I instantly recognised her as she had put my epidural in with Ruby! It was so nice to see a familiar face. After she had done all of her safety checks, we walked down to the operating theatre together where I said goodbye to Phil and kissed Lottie.

When I walked into the theatre I was amazed at how cold it was; I was told that this is normal for an orthopaedic theatre, however in order to keep me warm, I would be lying on a heated mattress!

My anaesthetist then started to prep me for the spinal; I had make it clear as soon as I knew that I was having an operation, that I did not want a general anaesthetic, I don't really know what it is that I don't like about them, but I just don't and I would much rather be awake and see what is happening. It took three attempts to get the spinal in place and I think that was because I am so small its difficult to get between the vertebrae and into the fluid to administer the spinal.

It must have taken a good twenty minutes for the spinal to kick in and I could still feel my feet and wriggle my toes; I could feel the spinal taking effect as it began spreading I could feel my body starting to go warm. To be honest it was quite a nice experience compared to feeling so cold!

I was then wheeled into the operating theatre itself and this was where I started to wonder if I had made the right decision to have a spinal! I was amazed that it was not actually as scary as I thought it would be. The lights were really bright and the multicoloured ceiling lights reminded me of fair ground dodgems as they were bright blue and green!

My consultant then arrived in the theatre with his assistants and I was shocked there were only six people and myself in the theatre, and two of those were anaesthetists. I decided I really really wanted to see what was happening and according to all the staff, I was the only person who not just wanted to see what was happening on a screen, but actually wanted to sit bolt up right and watch whilst my consultant made several cuts in my knee!

It was a very strange experience watching my knee be sliced open, but fascinating at the same time. I had to have some patches attached to me to act as an earth so that when my consultant started to use certain electrical equipment I was not electrocuted!

He placed a camera through the incisions in my knee, and then used various other tools to look around the inside of my knee; I was able to watch all of this on the big screen! My consultant was brilliant and described everything to me as he was doing it; I feel like I have had a guided tour of my knee! As a souvenir, my consultant even gave me a copy of the photos of the inside of my knee! 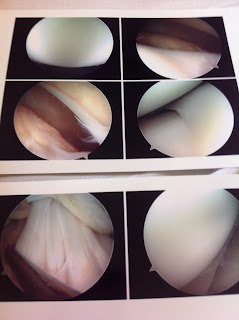 After he had finished cleaning my knee and removing certain bits of bone and tissue etc, the decision was made that my knee had to be opened up; to be honest I was not really prepared for this part and I was a little worried, but I knew that my consultant would do whatever he could to fix my knee and I have 100% confidence in his ability. He made a long incision and decided to do some work with the ligaments, with the aim of improving the tracking of my knee; he commented that one of the ligaments was the tightest he had seen, so he had to loosen it.

After about thirty minutes it was then time to sew everything back together; I joked with the consultant about how good his sewing was and maybe he could teach me how to sew! The atmosphere in theatre was really chilled out and we did have a lot of jokes and fun; I felt totally at ease. The anaesthetist even commented that my blood pressure and pulse where at their best at the height of the operation!

After twenty minutes in recovery I was taken back to the ward and was surprised to find I had been allocated my own room, I was starting to feel like royalty; lots of people came to talk to me as I was quickly known as the person who had watched her own operation! Phil and Lottie came to see me and at this point I was still feeling the effects of the spinal; it was lovely to be able to cuddle Lottie. 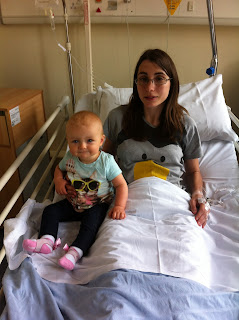 Fast forward an hour and half later and the pain was starting to get worse, I requested pain relief and was brought some meds; I was told that they would take twenty minutes or so to kick and I waited, but the pain was getting worse; Phil told two separate members of staff, but I have no idea what happened as two hours later I still had no pain relief and I was really upset. It was only when one of the senior nurses saw how distressed I was, that I was given some pain meds that actually made a slight difference!

After a couple more hours, I was getting really impatient and wanting to go home, so the physio was called and helped me to walk with the crutches; I found it really hard to do and lost my balance a couple of times, thankfully I had people ready to catch me if needed. 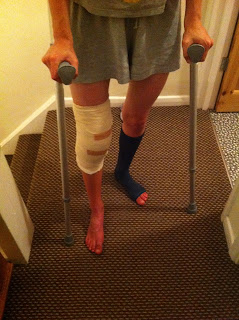 I am not sure how long the recovery is going to take as a lot more was done than originally planned. I am having my stitches removed in two weeks and shall be attending lots of physio. Would I chose to have a spinal and watch my op knowing what I know now? Yes, I certainly would; it was an incredible experience to witness how amazing and talented my consultant and medical staff were. Could you watch your own operation?