Ruby has enjoyed watching CBeebies from a very early age, and one of her favourite programmes is Mr Bloom; she loves Mr Bloom because she can relate to growing her own veggies. Ruby's playschool had a notice advising that CBeebies was coming to Abbey Park in Leicester and that if we wanted tickets for the Mr Bloom show, all we needed to do is apply. To be honest I was not holding out much hope of getting tickets as I knew that they would be incredibly popular. However I was amazed when a couple of weeks before the event I received an email telling me I had been successful and had some tickets. 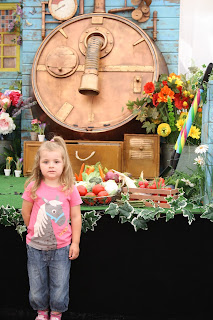 I had purposely chosen to not tell Ruby, as I did not want to disappoint her;  I told her the day before we went and her face really lit up, she was so excited! 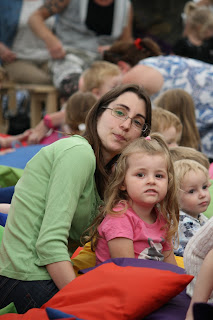 So last Sunday we headed off to Abbey Park; we had reserved seats to see Mr Bloom and so we went straight to the marquee where Mr Bloom would be appearing. We were very fortunate that we were one of the first people in the queue and were able to get front row seats, well front row cushions in fact as at the front near the stage were lots of scattered cushions were the children could sit to get a closer view and of course being a responsible parent, I had to sit next to Ruby in all the cushions, its nothing to do with the fact I was very excited too, honestly!

The show was amazing, even I found it brilliant! Ruby was absolutely blown away and there was lots of interaction between the audition and the people performing it was fab. 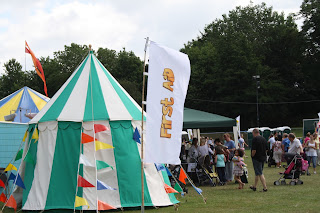 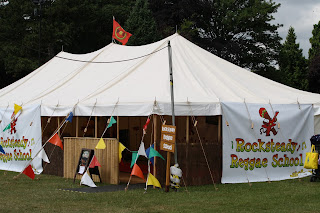 After the show we headed off around Abbey Park and enjoyed seeing some petting animals and helping to build a wooden den.

There were a few marquees offering different things, from arts and crafts, to mini shows and demonstrations. Ruby particularly loved a music class, in which she played a ukulele and then when asked for volunteers to sing a Rastamouse song, Ruby was first to put her hands up and went on the stage with a pretend microphone and did a little bit of singing and dancing, it was very cute to watch. I have no idea where she gets all her confidence from. 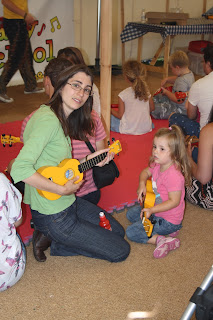 Their were lots of different things happening throughout the day on the main stage and we managed to get some good shots of Alex from CBeebies, when Ruby first saw him she shouted "he is off CBeebies!!!", I think she was a little star struck. 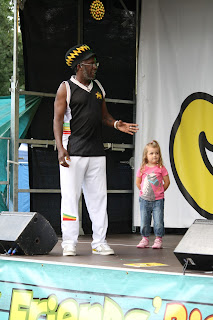 The writer of Rastamouse then came onto the main stage and read a Rastamouse story; several people were asked to partake and act out parts and Ruby, full of confidence, went onto the stage and helped out with a bit of acting! After the story, Rastamouse and Da Easy Crew appeared on stage and did some singing and dancing, Ruby's face lit up and she loved dancing and singing along. 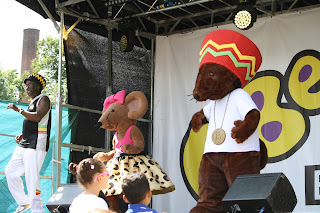 We all had a lovely family day out at Abbey Park and I can't believe that we were fortunate to get tickets for Mr Blooms show it really was a magical day out for Ruby. If there is a CBeebies road show coming to a park near to you then I would highly recommend you apply for tickets and go, its FREE after all!