This week seems to be absolutely flying by, I feel there is so much to do and I am running out of time! However today was not a day to be catching up on jobs, as Thursday is the only real day I am able to have quality time with both the girls on my own as there is no playschool for Ruby.

I decided to try something new today and make moon sand! We were originally going to do something else but I could not get the things I needed from the local shop, so that will have to wait until I go to the larger supermarket.

Moon sand is so easy to make, all you need is flour, oil and food colouring. I decided not to bother weighing out the ingredients as I just wanted to use up the left over flour I had; I then added some oil bit by bit and when it started to resemble some breadcrumbs, I added the food colouring and the all important pink sparkles!


I told Ruby that we were going to play at making cakes and she was very excited that she was going to be playing in her tuff spot! She gathered all her cooking utensils and bowls together, and very quickly got to work at mixing and making a cake! She added marbles to represent the cherries on the top and we even found some hundreds and thousands that were near their use by date, so they went in to! 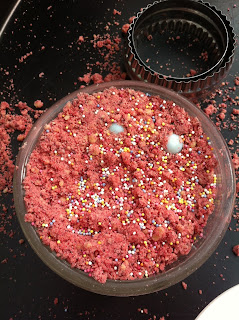 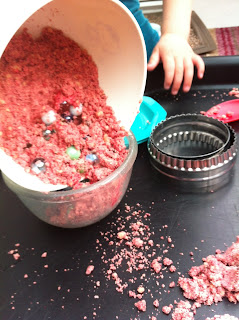 Ruby had lots of fun telling me that she was a chef and was making me a marvelous cake! Lottie also enjoyed the fun and wanted to join in too, so Ruby gave her one of her utensils which she happily chewed on! I love seeing how Ruby and Lottie interact, I never would have thought that they would get on so well and have done since day one; if there is anything to put a smile on my face its seeing my two girls laughing at one another, even if it is sometimes 6 o'clock in the morning!


Over recent weeks Ruby has started to embrace messy play and now, before I even say anything, chooses to take her clothes off and get into the tuff tray to experience all the wonderful textures; today was no different. After making her cake she took off her socks and walked in the moon sand; I don't think she enjoyed it as much as water play, as she said it was too messy for her! 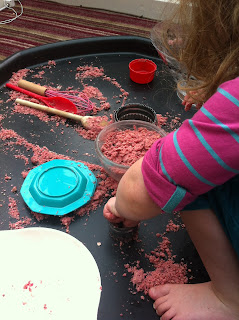 I didn't have to ask her twice to help me do the washing up; Ruby loves anything that involves water!

After washing up we had our favourite drink, hot chocolate with all the trimmings, and our lunch before spending the afternoon sticking and glueing to make daddy a pretend cake for when he arrives home from work.