Daddy to the Rescue!

Today has not been a good day for me; over the last couple of days, I have noticed that one of my breasts has become slightly tender, I assumed that I had a plugged duct and that things would work themselves out. Well, last night was horrendous! Things have escalated and I have been in tears due to the pain. I went to see the doctor this morning who confirmed my worst fears, I have Mastitis!

Its not the first time that I have mastitis, I had it when Lottie was younger and once with Ruby. For those of you that don't know, mastitis causes nasty flu like symptoms as well as almost unbearable pain once it sets in. I feel absolutely washed out and my legs are causing me so much pain and discomfort every time I try to move. After doing some research, I think that I have come down with mastitis because Lottie has just cut her first teeth and this has altered her latch when feeding. This is definitely one of the lows of breastfeeding but I will get through it and carry on feeding her.

With me being poorly, it was hubbie to the rescue; I am so grateful I started feeling like this on a weekend when he was not at work. Hubbie is a very hands on dad and is absolutely amazing at looking after the girls. We've always worked as a team when it comes to bringing up the girls; in the mornings, he will dress the girls whilst I make the beds, and prep breakfast and lunch for everyone.

I have spent the whole of today in bed, which is something that I usually hate as I am normally really active and just want to get on; but this time I was in so much pain, I knew it was the best option for me.

The girls have had a lovely time with hubbie today; after the normal ballet and swimming lessons, they got stuck into some messy play!. Hubbie has really got into messy play and today he set up the tray with ice cubes and marbles. This is the quickest and easiest messy play to set up, but Ruby loved it.


As usual, Ruby wanted to go into the tray so she took off her clothes and put on her swimming costume. Initially Ruby just started off by moving the ice around in the tray, and then decided to make cakes; she placed marbles on top of the ice cubes and said they were cherries.


Hubbie then helped Ruby made a pyramid of ice cubes and the marbles were used as bowling balls. Ruby really enjoyed knocking down he tower, which was repeated several times. Finally, hubby put the tray on a slight tilt and showed Ruby how to spin the marbles around the edge of the tray; he set up a goal out of ice cubes and got ruby to try to score by getting the marbles to spin round the edge of the tray and end up in the goal.


Lottie even enjoyed playing too! 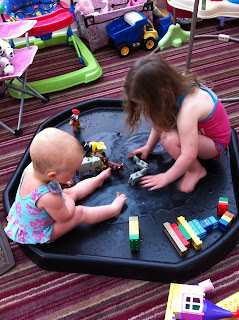 Before we packed the tray up, Ruby decided to bath her animals. The girls had a lovely day with hubbie and I am so grateful for the time to rest and start to recuperate. Hubbie is just about to cook a cumberland pie with veg; I am so looking forward to this as I have barely eaten all day!