Tuff Times, In More Ways Than One!

Ruby has been unwell over the last few days: it never usually seems to bother her when she is poorly, but this time was different; shes been plagued by a sickness bug that has been doing the rounds at playschool; I think it was only a matter of time until she got it. This was the first time that Ruby has ever been aware of being sick and as a mother it has been heart wrenching; all I want to do is make her better. Anybody who knows Ruby will be aware that she loves food; she went totally off it, not even her favorite jam on toast could entice her to eat! Ruby was so tired and looked so sad that I decided that a special treat was in order! I went off to my local DIY store and purchased a Tuff Tray (also known as a cement mixing tray). Nothing special about a cement tray and certainly not a treat you may think? Well I can tell you that this tray has already been used to have so much fun and in the process bring out lots of smiles and laughter.

There are so many different things that you can do with a Tuff Tray; you will be able to follow our adventures over the coming weeks and months. Messy play is very new to Ruby and I, we didn't do any when she was younger; I think I was too scared of the mess. At playschool, Ruby rarely used to paint or draw, instead favoring the home corner or dressing up! This all changed about a month ago when I decided to chill out more as a mum and jump into the world of messy play. As you will have already seen on the blog we have been using more paint and pens in our play times. 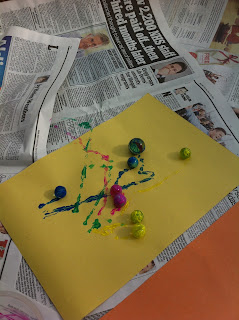 Yesterday we did some marble painting in the tray; I filled up pots with paint and then gave Ruby some marbles; she enjoyed counting them out and putting them into the paint. Ruby then swirled the paint onto the marbles before rolling them onto the paper. Lottie watched on whilst being sat outside of the tray; I think she really wanted to be in on the action as she kept reaching forward and grabbing the newspaper! After all the marbles were on the paper, I got Ruby to place them back in the right coloured paint pots; I cant wait to do this with Lottie as it will help her to learn to count and know her colours too.

I decided that it didn't matter if the girls got wet as it was near their bath time and they were due to have a bath. Next to go into the tray was some water and Duplo animals; I explained to Ruby and Lottie that as it was soon their bath time and the animals needed a wash themselves. I showed Lottie how to put the animals in the water, but she was far more interested in eating them! Ruby on the other hand knew what to do straight away and even invented her own little story and used the sharks to try and eat Lottie and I! After a while I suggested that Ruby might like to get into the tray; initially she was very unsure and then a few minutes later she went away and came back with her swimming costume! I put the swimming costume on her and she loved it, I struggled to get her out of it and she ended up being an hour late to bed! 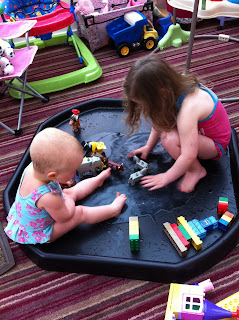 Thankfully Ruby is back to her normal happy self and today returned back to playschool which she absolutely loves.

As you may have read in one of my previous posts, we had applied for Ruby to start school this coming September; well I am incredibly relieved that today we found out Ruby has a place in the school that we put as her first choice! I feel a massive weight has been lifted as I was a bit worried because the school is not in our catchment area and it is in demand as it was recently rated as outstanding by Ofsted. It does however mean that we are going to have to use the car as the school is not within walking distance, but I know that I am doing what is best for Ruby and giving her the best possible start I can.