Ruby's Round Up and Thank You

I think its safe to say that Ruby is now coming back to full health following the bug she had last week. At the weekend we decided, as the weather was so lovely, to go and buy her a paddling pool; we already own a large 10ft one, but its just too big, so we bought a smaller one and it only cost us £12. I remember the days when paddling pools were so much more expensive than what they are now. 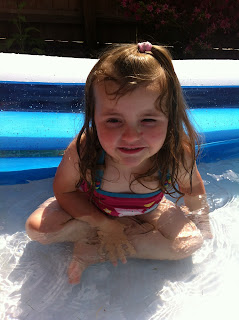 Ruby spent practically the whole of Sunday playing in the pool, jumping, splashing and hooking her toys out with her new fishing net, she had a fab time! We then got invited to a spur of the moment BBQ at my mums house in the evening and the food was fantastic. Ruby was so shattered by the end of it, she fell asleep in the car on the way home! We even had to put her to bed in her clothes! 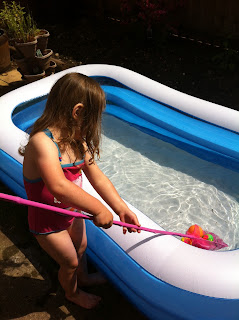 Last week Ruby had her appointment with a consultant to talk about her reactions to suncream, its a long story but you can read it here.

The doctor was running late; despite us being his second appointment, he was 45 minutes behind! not a good start when I booked an appointment early in the morning so Ruby would not have to miss any of play school.

The doctor looked at Ruby and noticed her eczema and decided to give her some new creams to cry, which is good, but I don't see why our local GP could not have done this. However the main reason we were there was to talk about why Ruby is reacting to suncreams, the doctor looked at the photos I had taken of Ruby and declared she was not having an allergic reaction as that's very very rare and its more than likely she is very sensitive to one of the ingredients in suncream.

Great I thought he is going to tell me that he will patch test her and find out which ingredient is causing the reactions. How wrong could I be! No, he wants me to patch test her. He will not do anything more for her, to me this is just not acceptable, I do not have the money to pay out on suncream for each one of them to cause her a reaction and then to go in the bin and also I have to apply such a small amount on her skin, and then if it does flare up, I have to put on another cream and to reduce the reaction and then I can't do another patch test for a week to 10 days. So in all this is going to be such a long drawn out battle to find one that's OK.

However the blogging community have been amazing on twitter, lots of people have recommended me many different suncreams and I am being sent various different ones to try out, thank you all so much for saving me some money and also thank you for being so helpful.