As a family we don't tend to go on holidays, to be honest we do not have any spare money; however my mum, along with other members of my family were going away for a few days in her caravan and the girls and I were invited along. So that explains why I have been a little bit quiter than ususual! did you miss me?

We went to a campsite just under an hour away from our home, the campsite was called Ferry Meadow and is run and managed by the caravan club, which my family are all part of. I was amazed at how little it cost us for 4 days, we only paid around £7 per adult per night and did not have to pay for the under 5's; it ended up costing me less than £30 for the 4 nights. 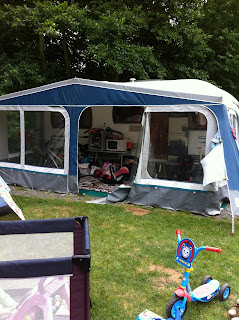 My mum travelled up on the Friday evening and set everything up, and we arrived on Saturday afternoon; this was maninly because Ruby has her ballet lesson and both girls have swimming lessons early in the afternoon and I did not want them to miss their lessons. It also worked really well that the caravan was all set up so there was no waiting around and having to keep the girls occupied.

When we arrived the sun was shinning and we had not planned to do a lot so we just enjoyed a bit of rest and relaxation. Situated behind the caravan was a woodland area and Ruby along with other younger members of the family decided to go into it and try and search for the gruffalo!

My sister, Ruby's auntie, Tegan helped to build a den in the wood and Ruby had a wonderful time playing in it and really did not want to leave the den when she was called for her dinner.


It was then bath time and this campsite has amazing facilities for people with children and babies as they have a special child bath room that has a low toilet and small bath, which ended up with Ruby and 2 of her cousins in at the same time. The children had obviosuly had lots of fun searching for the griffalo and playing as the bath water was a lovely shade of brown when they eventually got out! 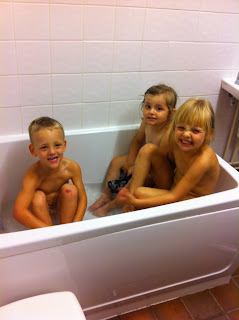 Then it was time for PJ's on and lights out. Ruby settled to sleep brillantly in her bed and to be honest I had no doubt she would be fine. Lottie on the other hand was a little miss. The layout of the caravan meant that I had to sleep next to Lottie so that she did not fall out of bed; Lottie is not used to co-sleeping and just kept wanting to play with me. When she looked to be going to sleep she would soon wake up and throw both of her legs up and down and this created a banging noisy that was getting really annoying at 11am; I ended up trying to pin her down with her blanket so she would not be able to move as much and it worked and she fell asleep.