H.O.P.E - Helping Others and Promoting Education - This is Nicola's story - 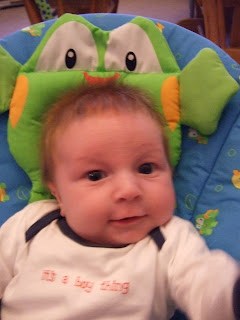 My first memory of wanting to be a mum was when I was in primary school.  I was asked the usual question of what you want to be when you grow up, my answer “a mummy”.  I also knew that I would have a little girl, I had a name picked out and I imagined all the girly things we would do together.

It took a little while for us to first get pregnant and unfortunately I had an early miscarriage at around 6 weeks I was absolutely devastated I didn’t think I would ever fulfil my dream of being a mum.  Then around four months later we were pregnant again.  I expected things to go wrong again but thankfully this pregnancy stuck.  I am diabetic so needed to attend diabetic antenatal clinics every 2 weeks.  Also because of my diabetes I was scanned every four weeks to check the size of the baby.

I had my first scan at 7 weeks and the sonographer had to tell me to try and stop crying as she couldn’t see anything I was crying so hard.  As soon as she told me she could see a heartbeat the relief was immense.

My pregnancy continued with very little morning sickness and the regular checks.  I found the antenatal care very difficult because virtually every time I went I saw a different doctor who would tell me how to try and control my diabetes in a different way.  I was supposed to get my blood sugars back to a reasonable level within one hour of eating but if I did this I ended up having a hypoglycaemic episode within the next hour.  I was so frustrated all I wanted to do was keep my baby healthy.

At 20 weeks we had a scan and found out that we were having a boy.  I am ashamed now to admit that I was devastated how could this be – where was my baby girl.  Also around this time I started having severe pain in my pelvic area.  I was diagnosed with symphysis pubic dysfunction (SPD).  I managed to carry on working for a few weeks but the pain was so bad every time I moved that I ended up being signed off for the last 3 months of my pregnancy.  Those last 3 months I was in pain all the time - when I turned over in bed, if I walked up stairs, if I walked anything more than a short distance, if I bent down and if I got in and out of the car.  I had some physiotherapy and they told me ways to move to try and keep the pain to a minimum.  I spent the majority of the next 3 months at home alone only really going out for my antenatal appointments.  It didn’t help that the last month of my pregnancy (December/January 2010) there was very heavy snow and even walking from the door to the car was extremely hazardous.

Through most of my pregnancy my baby was in the breech position and despite trying everything including external cephalic version nothing would get him to move.  I had been advised that due to my diabetes I would be induced at around 38 weeks and because they would be inducing me early there was a high probability that it would not progress and I would end up having a caesarean.  So in some ways it was a relief when they told me I would need to have a caesarean due to the baby being breech.

So on 11th January 2010 we set off for the hospital not entirely sure whether or not we would be having a baby that day as due to the snow there were staff shortages.  However because of my diabetes I was classed as high risk and was at the top of the list to have my caesarean.  All went well and around lunch time I was holding my baby boy, Samuel.  He had the most amazing hair – dark with blonde tips and so spiky – even the midwives commented on his hair being so unusual.  I would also like to say here that he weighed 6lb 13oz so all those worries about my blood sugars making me having a large baby were thankfully for me unfounded. 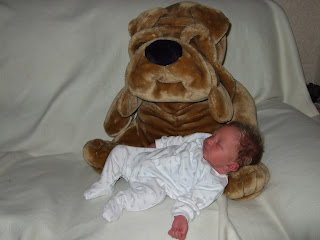 The first night in the hospital was awful.  At around 9pm I was finally allowed to eat having not eaten since midnight the night before, I was still catheterised from my caesarean and I was alone with my newborn baby.  I was terrified.  I was trying to breast feed but Samuel kept having very low blood sugar levels so we were advised to top him up with formula feeds.  During the first night at one point Samuel started retching and bringing up clear liquid I didn’t know what to do.  I didn’t call the midwives because I could hear someone actually giving birth on the postnatal ward so I knew they were all busy.  I just tried to keep calm and hold him.  Later on a midwife came to see me and I explained what had happened.  She said it was normal due to him being delivered by caesarean – normally a baby would get rid of these secretions during the delivery – I wish someone would have told me this could happen so I didn’t panic.  I spent the rest of the night struggling to get my baby in and out of the cot at the bedside when I still really couldn’t move because of the catheter.  It was one of the longest nights of my life.

At 6am the next morning a nurse came and removed the catheter and asked if I would like to have a shower.  I got out of bed and the SPD pain had gone it was like a miracle.  I had been warned that the pain after a caesarean is bad but honestly I had been in so much pain for so long that any pain I felt from my caesarean scar was a breeze.  I nearly ran to the shower as for the first time in months I could walk without pain.
I spent three nights in hospital on a four bed ward and didn’t get much more than one to two hours sleep a night.  Due to Samuel’s low blood sugars he had to be fed every two hours and have his bloods taken every four hours.  I was so diligent in setting my phone alarm and getting him up feeding him, trying to go back to sleep, getting up reminding a nurse he needed his bloods doing and then feeding him again.  Also to contend with were the other babies crying, a Chinese woman in the bed opposite on the phone talking extremely loudly at about 3am and another lady who had the most awful hacking cough.

On the fourth day I begged to be allowed to go home.  I needed to sleep and couldn’t bear it any longer.  I also had a lot of visitors which meant I wasn’t getting much rest in the day either.  As I had Samuel in the hospital I worked in all my friends and colleagues wanted to come and visit.  It was lovely that everyone wanted to see us but absolutely exhausting.

The first thing I remember doing when we got home was phoning my mum.  I was crying harder than I had ever cried before and begging my mum to come and take Samuel away.  I knew that I wasn’t good enough to be his mum, I couldn’t cope and he had to be taken away and adopted.  My mum talked me down and suggested I try and go and get some sleep.  My husband tried to take over but unfortunately Samuel just cried and cried all night.  I think we both thought at that point we had made a huge mistake.

By this point I was so exhausted I couldn’t sleep no matter how hard I tried.  I had a history of depression and during my pregnancy had been referred to the mental health midwife.  She phoned to assess how I was doing and I told her I didn’t know if it was just exhaustion or if I was getting postnatal depression.  We decided to leave it a few days and see what happened.

I can vividly remember one Saturday morning sitting on the edge of my bed while my husband was downstairs with Samuel and thinking if I give myself too much insulin it will all go away, everyone will be better off.  I sat there a little while longer then went downstairs and told my husband what I was thinking.  He was devastated and we immediately went to the emergency doctors.  Unfortunately they couldn’t/wouldn’t do anything and told me I needed to go and see my GP as soon as possible.  Of course as it was weekend I had to wait until the Monday.  At this point Samuel was only 2 weeks old.  When I saw my GP I was started on anti-depressants straight away and referred for counselling.

At this point things become a bit of a blur.  I had 12 months off work for maternity leave and hated every moment.  I would count the hours until my husband would be home and the thought of spending the entire day at home on my own with Samuel was terrifying.  I would bundle him up in the pram and literally walk for miles as somehow being out with him in the pram was better than being at home.  There were times I couldn’t even bear to look at him it made me feel physically sick.

Going back to work was a huge step forward for me.  I could have time being me again.  People used to say to me how hard it must be leaving my baby and coming back to work.  I would say yes it is hard because I knew that was what I was supposed to say but in reality being at work was a relief.  I went back to work four days a week and would spend one day a week at home with Samuel.  I can’t say at what point things got better but I remember one day my husband came home from work and he asked where we had been that day and for the first time ever we hadn’t been out.  I had spent the whole day in the house alone with Samuel without feeling the desperate need to get out.

Now 3½ years later I can honestly say I completely adore my son.  The only feelings about PND I have are guilt that I didn’t love him completely from the start.  The only lasting effect I have now from PND is that I know Samuel will be my only child.  The thought of going through it all again is just too awful to think about.  I know there is a chance that it might not happen again but I’m just not willing to take that risk.  I have a gorgeous son who I adore and the funny thing is he loves helping mummy do baking and hanging the washing up and recently he has even started to help me with my sewing.  All those things I could only imagine doing with a girl are now happening with my little boy.  Life is now good and our family feels complete.  I am only now starting to consider the possibility of coming off the anti-depressants honestly I am scared that I will go back but I’m hoping that soon I can take that final step and finally be free from PND. 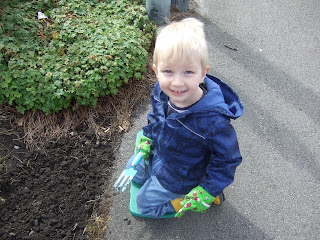