HOPE - Helping Others and Promoting Education - This is Katrina's story - 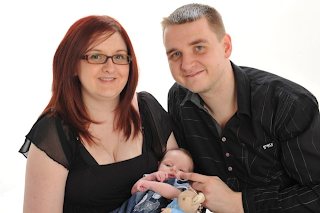 My husband, Scott, and I brought our wedding forward 12 months because we couldn't wait to start a family. 1st April 2011 was our wedding day, and in the May I was given the all clear from some abnormal findings from a cervical screening so we were ready to go! It didn't take long to get pregnant, we found out at 5am on 10th August 2011 that I was four weeks pregnant. We were so excited, we'd done everything by the book, eating healthy, taking pre natal vitamins and completely cut out alcohol since we started trying in May. For that one week we were walking on air. 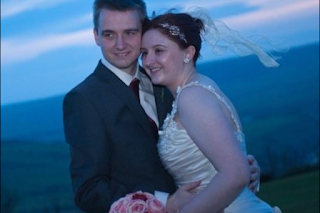 One week later and sickness struck, I thought "ok this is to be expected"... After a week it was becoming progressively worse, I was vomiting every 40 minutes around the clock over the weekend and by the Monday morning I was so weak I couldn't lift my head off the pillow. Nausea had at this point hit me like a truck. There's no point trying to explain the severity of the nausea, no one who hasn't experienced HG would understand it, and there are literally no words to describe it! I tried to get in the shower and collapsed, so I had to stay home while Scott went to work. I felt so humiliated to phone work for a sick day because of "morning sickness" I hated myself, I couldn't understand why I was so pathetic I couldn't cope. My mum took me to the doctor that afternoon, 5weeks pregnant and I was diagnosed with HG, prescribed Avomine and sent home with a sick note and the instruction to send in urine samples daily until the doctors were happy the ketones had reduced, otherwise it was hospital. After a week off work I thought things were improving and went back to work for a week. But by the Friday it was coming back.

On the Monday I was back at the doctors, this time given Cyclizine and a sick note with strict instructions not to return to work without a full assessment from the doctor this time. But I never got back to work....

I had 24 hour care, my mum would arrive every morning 15 minutes before Scott left for work and she would stay with me until he got home. Scott never went out, he went to the football matches because I told him to, and he went for drinks one night with an old work friend of ours, even then he stayed in the pub four houses away and called in to check on me, despite my mum been there with me. He really is a kind, caring man and I am so lucky to have him. My vomiting would be from around 6/7 pm through until 1/2pm the next day with nausea so bad I couldn't sleep. He would stay up all night with me, holding me up because I was to weak to sit up on my own to be sick in the bucket, holding my hand when I was feeling scared, he would talk to me for hours despite me not saying a word back. My nephew Zak, who was 14 at the time would also come and sit with me every week, he would sit there for hours telling me about school, his ice hockey matches and his computer games. He didn't mind that I barely spoke a word in return. He always made me smile and when my bump started to show he would call me "Podgy" to make me laugh. He's a fantastic kid, so kind and caring. My brother Ian was also a great support, he would call me regularly to check on me and let me know he was thinking of us while he was busy away with work, and would call in to visit on a weekend too.

No drugs seemed to work, i would vomit between 25-40 times every day for 8 months. I also tried acupuncture with absolutely no difference what so ever.

I had a lot of hospital visits ranging from 2-4 days at a time hooked up to iv's and injected with drugs to stop the vomiting and rehydrate me.

28 weeks was when HG peaked to its worst, the GP sent an ambulance, I was very weak, tachycardic and barely concious. Scott was at work so my mum came with me in the ambulance. A&E didn't check my notes to see that I had previous bad reactions to Cyclizine and injected me with it. This lead to temporary paralysis just to add to the trauma. Basically all anti sickness drugs had stopped working and I had a severe kidney infection. After a week in hospital hooked up to iv's I went home with more new drugs, but literally within 6 hours HG was back in full swing!

At 36 weeks whilst on the CTG machine at the hospital, a doctor I hadn't seen before who was covering for my usual consultant came to see me. He had researched hg a lot due to his wife suffering from it and he very quickly prescribed me Ondansetron, a very strong anti sickness drug that is very expensive and usually kept for cancer patients. I took this along with Metoclopramide, & Ranitidine. I couldn't believe after 7 months of begging doctors I had finally got Ondansetron! Within a few days the improvement was visible, vomiting reduced to around 15 times a day and a "window" of about 3 hours mid afternoon where the nausea reduced enough that I could eat small amounts of food! I even managed a trip out to my Aunt & Uncles wedding anniversary party, although hg made sure I paid for that for a few days after!

At 38 weeks, Easter bank holiday weekend I was rushed in late at night again. They patched me up, checked the CTG, took some bloods and sent me home. On the Tuesday 10th April 2012 I had the call from the hospital asking me to go in and take my bags. They put me on the CTG to start with to check babies heart then informed me my bloods had come back and they needed to induce me as my liver and kidneys were failing. So I called Scott to come and at 5pm they put me in a delivery suite and broke my waters. They gave me IV fluids and continued my anti sickness drugs. I was also put on a drip to increase contractions to help the labour along. After 12 hours of labour, vomiting and barely conscious, Griffin's heart started to slow down, he had also turned onto his side. The doctor came and decided I needed taking to theatre for a forceps delivery. Griffin was then born very quickly, 11/04/2012 05.08 and 6lb 6oz. He was breathing, his heart was fine, he was perfect. I kept asking them if he was ok and couldn't take my eyes off him. I couldn't believe after 8 months of starving, dehydration and so so many drugs that I had this perfect little baby! 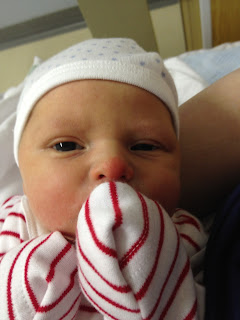 The doctor told me I'd sustained a third degree tear and that he was stitching me up, it wouldn't take long. The midwife asked if I wanted to breastfeed Griffin still, which of course I did. I was shaking terribly though so Scott held him on me and he fed for ages! That to this day is the happy moment I cling to through a terrible traumatic day.

As I was laid there with Griffin feeding, I heard the doctor call for the head consultant to come. The anaesthetist was instructed to give me another dose of the epidural I think it was, no one was smiling any more, everyone went quiet. Even Scott looked white as a sheet, I was so scared. The doctor told me the tear was worse that he had thought and he couldn't stop the bleed, the consultant came and together the got to work. My eye lids were so heavy, I could barely stay awake but the fear kept me awake just.

It took them three hours to fix me and stop the bleeding. But that didn't stop all the fussing and worrying of course. So it turned out it was a fourth degree tear. I'd lost a lot of blood and my blood pressure was very low. I continued to breastfeed Griffin with Scott's help. I felt amazing to be honest, the hg stopped not long after he was born and by 10am I was starving! I had toast and a cup of tea, it was wonderful to drink something! I stopped my anti sickness drugs immediately. By afternoon they were still concerned about my blood pressure and I was very weak. So I was moved to a side room, I wasn't allowed out of my bed for 24 hours. They let Scott stay with me that night, and I had blood transfusions through the night, while Scott held Griffin on me so I could continue to breastfeed. I did feel much better by the next day and after another couple of days they let us go home. 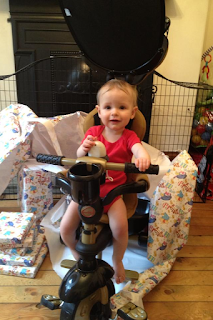 I did suffer with post traumatic stress for a while after, and post natal depression. But writing down my story and talking about it has over time helped me to come to terms with what happened. But looking back I am so proud of our little family for getting through what has to be the toughest year of our lives.