As this is breastfeeding awareness week, I thought it would be a good opportunity for me to share my own experience, including good & bad experiences, formula feeding and the vast amount of emotions and tears that have been shed along my journey.

Before falling pregnant with my first daughter Ruby, I was never really aware about breastfeeding until my midwife talked to me about it at an antenatal appointment. I had never seen anyone breastfeed a baby and to be honest, the thought of having a baby attached to me made me feel a bit sick. Looking back I now realise that I was lacking in body confidence and I had been surrounded by friends and family who all bottle-fed; so I saw breastfeeding as abnormal.

The midwives that I saw antenatally, tried to offer me some advice on breastfeeding and I firmly refused it; breastfeeding was something I was not going to do! I remember attending a private antenatal class and the teacher was horrified that I wanted to talk about safe bottle feeding and sterilising etc; I felt like I was a bad mummy, I was made to feel really small.

The NHS antenatal class was a bit better, I was not pushed into the corner and made to feel small, but I was only given a leaflet explaining everything; I still do not think this is good enough! There is so much emphasis being placed on breastfeeding. It is an individual choice for each mother, so why are the health care professionals only giving out advice on one side? or if they do, its only a leaflet; whereas they seem to be able to talk about breastfeeding non stop... and don't get me started on the whole breast is best slogan as that really bugs me too as I believe that happy mum equals a happy baby; sometimes breast isn't for the best which certainly was the case when I had Ruby.

I had planned to give birth to Ruby in the local midwife led unit, however when I went there shortly after my waters went, they said I should go home as I was only in early labour! As it turns out I was not, I was just very relaxed and chilled out! Ruby was ultimately born at the hospital and I don't really have anything bad to say about the time I spent in there; however I knew that as soon as I was up, showered, dressed and had something to eat, as long as Ruby had, had a feed, I could go home; so that is what I did. I was happy with the decision that I made to bottle feed Ruby, right up until my milk came in around day 3 or 4 where filled with emotions, I tried to breastfeed her. With so little information and a very hungry and unsettled Ruby, things did not really work out. I did have a fantastic midwife who tried to help me to get Ruby to latch on and she did do this a few times but I hated it, it made me feel so uncomfortable and yucky. However I did realise the benefit of breast milk, so I started to express milk and put it into a bottle; this was a very good compromise as I didn't feel my body was being invaded and Ruby was still receiving breast milk. As I was a first time mother of a newborn baby, I was not as prepared as well as I thought I was for the challenges and emotions it would bring. There was so much to learn and it was such a big steep learning curve. I was so tired and drained and could not sustain expressing and feeding Ruby, so I switched back to formula. Ruby changed and so did I when she started on formula, she was more content, we were able to establish a routine and I felt more relaxed; yes I do still look back and wish I had breastfed her more but I can't change the past and it was the right thing for us at the time. 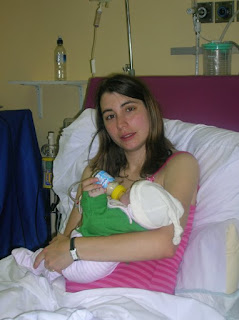 Fast forward 3 years and I am pregnant with Lottie; to be honest I approached breastfeeding much the same way as I did with Ruby, I did not want to do it, firstly based on my experience with Ruby and then also my body confidence issues. Lottie was a planned home-birth; I really had to fight for a home-birth because my midwife wanted my iron levels to be at a certain level; I had read the latest NICE guidelines and knew what my rights were;  my iron at the time was over their guidelines, so I was prepared to challenge and fight for a home-birth. I knew that I might need to be transferred to hospital in case something were to happen to me or Lottie, but I was prepared for this. I had only left Ruby for one night by that point, and that was when I was in hospital suffering from hyperemesis gravidarum. I did not want to be away from her or my home comforts. I am still amazed nearly a year on that I had such an amazing experience and gave birth to Lottie at home; I think I will be buzzing off it for some time, it really was the most amazing thing I have ever done and you can read more about it here.

After Lottie was born, I started off by bottle feeding her, however by day three I was filled with emotions again, much the same as I was after Ruby's birth; I rang up a lovely lady from La Leche League and cried down the phone explaining what was going on. I offloaded all of my concerns and she was so helpful and non-judgemental, so I decided to try and breastfeed Lottie; she actually latched! I could not believe it! I was still quite wary of my body confidence and really was not sure what to do, so I decided to give her expressed breast milk for some feeds and breastfeed for some of the other feeds. I took the lead and made the decision to feed her by whatever method felt best, as and when she needed feeling. I knew that if I was stressed about feeding her, it would make her wound up and it would be a vicious cycle. If I'm being honest, the main reason I became more determined to give breast milk to Lottie was purely a finance one, I was aware that formula did not come cheap and if I could express enough milk, then less formula would mean more money to buy nice girlie clothes! However over the coming weeks something changed. I can't remember when, but she was no longer having breast milk in a bottle but taking it directly from me! 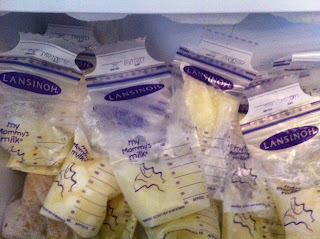 Breastfeeding Lottie has not been an easy journey, we have come up against so many barriers and I have been unfortunate to suffer with mastitis twice; but we have overcome it all! I have been more informed this time and have had someone who has supported me and given me the confidence to carry on. At around 7 weeks, Lottie was diagnosed with reflux; I can honestly say that this was a really hard time, one of the hardest parenting challenges I have ever had to deal with. I had a baby that screamed all day, yes you read that right, all day! I still don't think people believed me that it really was the bad; there was no let up. I still do not know to this day how I coped, but I fought with all my strength to get her onto the right treatment and did not back down until her reflux was under control. I even had to go dairy free for two weeks to check that Lottie did not have a cows milk protein intolerance; this was incredibly hard for me to do and my family were concerned that I would waste away!

I have overcome all the hurdles, well Lottie and I have; I feel we have worked as a team and achieved it together. I can honestly say that breastfeeding has increased my body confidence and I am incredibly proud that 11 months on, Lottie is still being breastfed; granted its now only a few times a day, but I do miss the frequency of feeds and snuggles. I feel that I have bonded with Lottie in a different way to Ruby, I feel a lot more in tune with her and she feels more connected to me. For anyone reading this, I would just say what I have said before, that I strongly believe that a happy mum equals a happy baby and if you did not succeed at breastfeeding first time round and are now looking to do again, then try it, you might find that all goes well. However if breastfeeding is not for you, it does not make you a bad mother! As long as both you and your baby are happy and loved then that is all that matters.

I never thought I would say this but I can honestly say I have enjoyed it and I will definitely feel sad when Lottie will no longer want her mummy milk.


Don't forget I'm running a giveaway at the moment where you could win a Breastvest, more details can be found here.