Last weekend marked the 5th anniversary of the annual wheelbarrow race in our village; over recent years, it has started to become more and more popular. Its an absolutely amazing family day out that raises money for a local hospice that does such wonderful work; in fact my own grandfather was in LOROS before he sadly passed away.

The event is held at the local recreation ground and there are lots of wonderful things on show and to buy, ranging from home made cakes and jams, to knitted dolls and hand-crafted jewellery; there really was something for everyone to enjoy.

This year my sister Tegan and her boyfriend Felix had decided to enter the junior wheelbarrow race. All of the teams must dress up in fancy dress to be able to enter. Tegan went as an Indian, and Felix as a Cowboy; Ruby was a little bit jealous that she had not been allowed to dress up as Jessie from Toy Story. 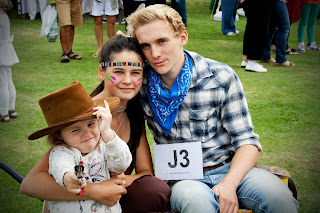 Some of the other competitors dressed up as superheros, scooby doo and pirates, amongst others.

We cheered on Tegan and Felix and they came a respectable second in their junior race. After the race, we decided to have some ice cream, whilst Phil and my step Dad went off for a cheeky pint. 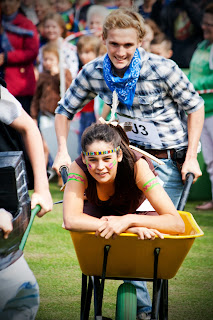 We then watched the adult race, which must be a good couple of miles long, as the route goes from the park, all the way into the centre of the village, around the war memorial, and back to the starting line.

The adults did amazingly well; there would be no way that I would be able to do it, I just do not have the strength or stamina. Ruby and Lottie both enjoyed the excitement of the race. 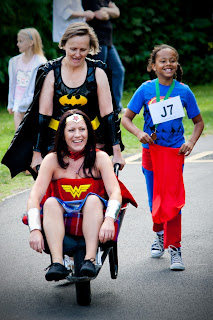 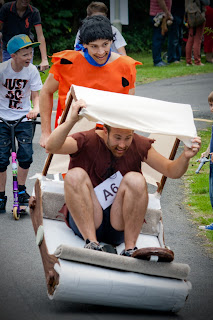 Just as we were about to leave we had one last look around at all the stalls, and Nana bought Ruby a lovely old fashioned knitted dolly that turns inside out to create a different doll; Ruby instantly fell in love with it and has been placed pride of place on her bed.

We had a fantastic day and its fair to say the countryside air made us feel very tired; even though I used my crutches and tried not to put too much pressure on my knee, it did unfortunately swell up again, so I had to spend the rest of the weekend putting my feet up.