On Tuesday we received an invitation from the lovely people behind Sugar Puffs and Honey Monster cereals, to attend a road show and meet the honey monster; initially it was just going to be Lottie and myself attending, however Ruby's school teachers were taking part in the national teachers unions strike, so it meant Ruby's school was closed for the day. 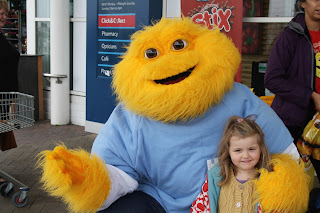 Ruby was very excited at the prospect of getting to meet the Honey Monster; they had kindly sent her a cuddly soft toy version so she knew who she was looking for, and she was very excited when she saw him. She was initially a bit shy when she came face to face with him, but within a couple of minutes she was back to her normal self and was happily giving him lots of hugs. 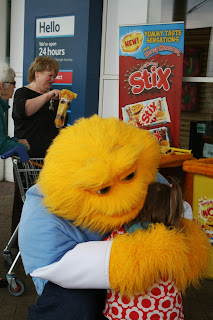 Ruby even had a great time helping the PR lady hand out samples to other members of the public; she had a natural ability at doing this job, so who knows, maybe in the future she might work in PR? 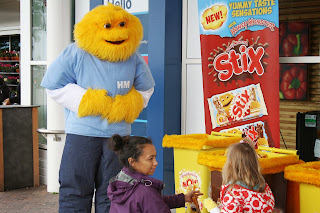 Lottie on the other hand, was completely oblivious to what was happening around her and slept through the whole event. 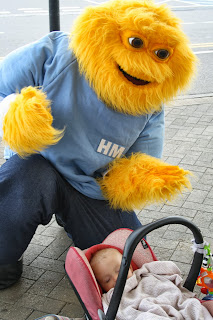 In addition to the cuddly Honey Monster toy, we were also sent a number of Honey Monster cereal products to review. The branding of the products are really eye catching and are very easy to spot on the shelf at a supermarket. They also clearly feature the Honey Monster!

We were sent a box of the new Honey Monster "Choco Wows" and "Honey Wows" cereals to try.

The cereals are low in salt and a great source of fibre; they have no artificial colours, flavours or preservatives and are fortified with vitamins and iron. They are also really tasty! 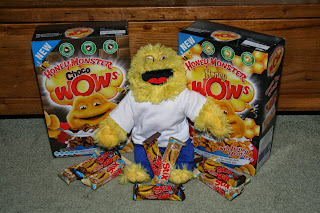 The cereals are multigrain hoops coated in honey or chocolate, with oats and crisp rice; Lottie is a real little cereal monster and happily munched her way through a handful of both of the different varieties; Ruby on the other hand much preferred the Honey Wows over the Chocolate ones, which surprised me slightly, but she still ate a lot of them!

Along with the boxes of cereals, we were sent two packs of Honey Monster "Stix" cereal bars to try. The bars come in two flavours, Honeycomb & Milk Chocolate, and Marshmallow & Vanilla Yoghurt. 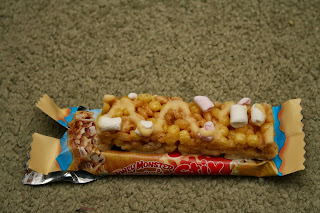 We have been really impressed with the cereal bars; they are a great size for lunch boxes as they are 15g; they are really tasty; my favourite has to be the chocolate variety. The other good thing about the bars is that they are not sticky and not too crunchy; they are definately something that I will be buying for Ruby's lunch box and letting Lottie have as a treat. As I mentioned before,I particularly enjoyed the Chocolate one, however I would have liked the option of a bigger bar as they are very tasty, but maybe I could have two?


I think its fair to say that the new range of Honey Monster cereals have gone down very well in our household. We will definately be considering them when we do our next food shop.


Disclaimer: We were kindly given some free samples to try however all opinions and thoughts are my own and that of my daughters.
Posted by Unknown at 07:46