An Update on the Christmas Dilemma

You may recall that I recently wrote about the dilemma we faced as a family, we were unsure how to combine both mine and Phil's childhood Christmas traditions together to form the father Christmas story to tell to Ruby and Lottie. If you would like to read more then you can read the post in full here. 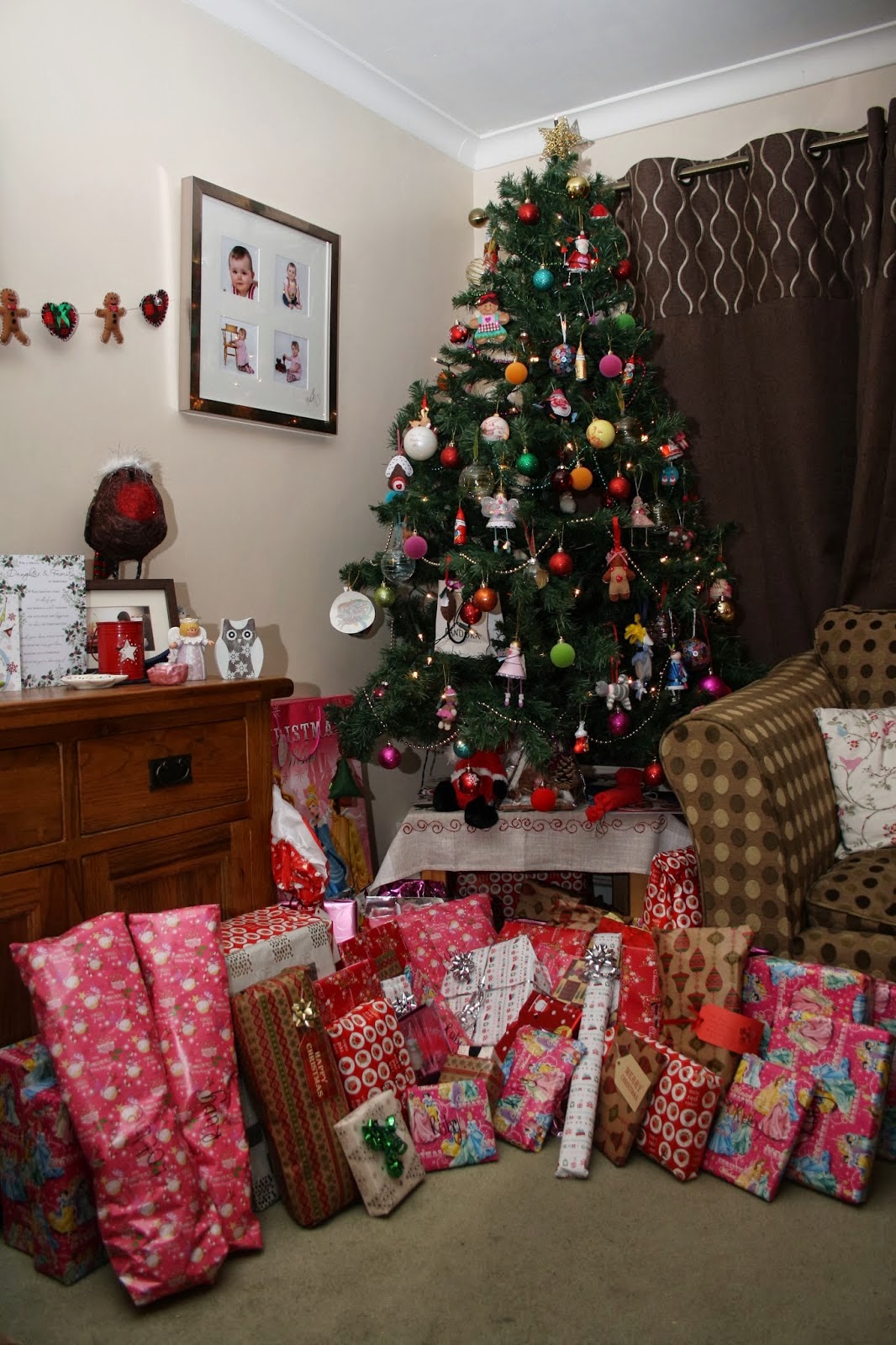 I asked for your help in my blog post, by sharing with me your Christmas traditions; I was surprised at how similar some of them are, but equally how different they all are. here are just a few comments that I received from you.


"To place the presents as and when they come takes the 'wow' element away of coming down Christmas morning to find Santa has 'been', however we used to take it in turn to open presents and still do as it's nice to see what the other has and their reactions etc"


"Growing up we had a stocking on our bed which was filled by Santa and all other presents were put under the tree after we went to bed but not delivered by Santa. Now I put presents in the living room as they come as a lazy way of making the room look Christmassy but don't set it all up 'properly' with all presents under the tree until Christmas Eve. We don't pretend Santa is real but we have a toy Santa who puts a present in each stocking. We take it in turns to open presents mainly so we can keep track of who gets what from whom but we don't do all of them in one day as my family visits with presents on Boxing Day and John's family in January."


"We used to leave stockings out on Christmas eve, all the presents from Santa were in them (we asked for 2-3 things depending on price range and we got lots of wee stocking fillers) most stuff from relatives and friends went under the tree as we got it, but any thing from parents was put out Christmas eve/Christmas morning. We would open all the Santa presents that morning as soon as we got up (except for the year we woke up at 3, ran into our parents who had just finished everything and just got to bed themselves and we were told to go back to bed and wait til proper morning) then we would open all the under tree presents either before or after dinner. The presents would be passed out into piles then everyone opened them together at the same time. Ahh ... memories."


"Presents from family and friends go under as and when they arrive/are given. Santa gifts and stocking are separate and go under Christmas Eve after the kids are in bed. In our tradition here (and most people I know over here), Santa brings separate gifts and fills the stockings. He doesn't bring all the gifts. We definitely just open all together, one person opening one thing at a time while everyone watches would make me cringe."


"We had all presents appear on Christmas morning delivered by Santa but only one and stocking from him, we do this now as well. We always took turns and we still do this otherwise I feel it turns into a bit if an ungrateful frenzy where no one really acknowledges anything, knows what anyone got or says thank you - just my opinion though!"

"Yes I totally agree with you I never had presents put under the tree till after id gone to bed an Santa came at night and delivered them all. Still took it in turns to unwrap though (sometimes my sistès didn't do this) because mum and dad wanted to know who was off and what we got etc so we could say thank you."


"I agree with you, Santa brings presents Xmas Eve after bed. But only a couple are from him, we sent the rest for Santa to deliver. We usually each open one pressie at the same time so it gets done a bit quicker!"


"I grew up like you. No presents under the tree they were sent to Santa for him to deliver. We did however do one present in turn so everyone could watch. We do this now too. The only thing I have added is a stocking. We never had a stocking as child but I have one for the boys which I fill with small things, chocolate coins etc. and I place on there bed for the morning. The rest are downstairs."


"Santa always comes at night and has done since I was little just keeping it the same for james. I have a stocking that goes on his stairgate of his bedroom door which are presents especially from Santa. I get random cardboard boxes and wrap them up for display purposes only and tell him that they are the presents for the elfs."


"I grew up with same as you but I have adapted ir slightly in that we buy adults presents and then they go to Father Christmas to deliver, this means they can be involved in buying for us which they enjoy and we get round it by saying we wrap adults presents ans leave out for F.c. To collect so he can deliver, now we blow a message up to f.c.'s fairies telling him they arw there for him to collect and then he 'collects' them that night. Yoy could say presents under your tree are adult ones and f.c. Collects xmas eve and delivers to correct people. F.c. Is just to busy to do all adult's buying so grown ups help in this way xxx"


"This is what we do. We are lucky as both rich and me had similar Christmases so it's worked out well for us. The girls stockings from father Christmas contain an orange, chocolate coins, something like a cd or a book a & hair clips or something similar. All other presents are bought by us because F.C has to buy present for all the children. My oldest helps to wrap up the other presents (except her own) in the week before Christmas. We put these under the tree on Christmas Eve & take a photo of her with them. Santa delivers the stockings on Christmas Eve night & the girls open these in the morning. We alternate going to my parents or my in laws each year we live within 30mins of each so take the relative presents to their house on Christmas morning often going to church too. The girls open one present before lunch (one that will occupy them) lunch is at about 1.30. Other presents are opened after lunch. Emily seems very happy that FC brings smaller presents & loves leaving the mince pie & carrot out, she really enjoys helping to wrap the presents we have bought. For me this is part of the magic of Christmas watching her get excited about relatives receiving their presents."


"Not sure but now xaras nearly 8 and because she found a few presents last year we now tell her that we buy the presents and Santa delivers them with a gift from him and if and she has to be good. They arrive Christmas Eve after she has gone to bed and she puts out food for Santa and the rein deer before she goes to bed. Then she opens up the presents in the morning first before us. I think she still believes as she got a letter this morning and her face lit up! "


"We had the same thing as Phil - my dad played Santa and gave out the family gifts from the tree, it took ages watching everyone open them but we got to see everyone enjoy each gift and it made the magic last and taught us all patience. The pressies in the stockings/sack were left at end of the bed by santa (unwrapped) though so we had already had our santa pressie and chocolate coins"


After reading through all the suggestions and talking it through with my husband, we have come up with our story. Ruby and Lottie will be involved in buying and wrapping up presents for everyone except our own little family. This I hope will encourage their excitement about giving presents away to people. The presents that are wrapped for other people shall be placed under our own Christmas tree until Christmas eve where Santa will remove these presents and take them on his sleigh to the other peoples homes, and then will put their presents under the Christmas tree.

Stockings will be left out on Christmas eve and Santa will fill them with little presents from Santa himself, these are allowed to be opened before breakfast. After the stockings have been opened, we will go downstairs to see if Santa has delivered any presents for them, we will then have a family breakfast before we open the presents under the tree. We will not take turns to open presents one by one, but will will also not rush through them so that myself or Phil can write down what everyone gets so we can write our thank you cards.

So that's our Father Christmas story, do you think it will work? I would love to hear if you have any more suggestion.
Posted by Unknown at 20:48