A little while ago, we were kindly sent a brand new board game to review. The game is called PLYT and is based around the idea of successfully using mental arithmetic to multiply two or more dice together in order to move a counter around the board. The first person to the centre of the board is the winner. The game comes with an optional sand timer to put opponents under pressure to complete the calculation quickly. In addition to this, certain squares on the board require you to turn over a chance card, which will require you to move either your, or one of your opponent's, counter backwards or forwards along the board. 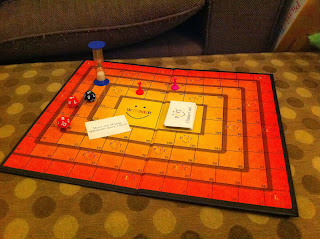 The game is designed for ages four and above, and has a flexible rule set to allow people of different ages to complete fairly with each other. The number of dice used for any given person depends on their ability, which opens the game up to mixed ability and age players.

We were excited to receive the game, and began playing it immediately. Ruby is four years old, which is within the game's target audience; after unpacking the game and reading the rules, we soon realised that the minimum age rating stated on the box was set too low, and Ruby, who is only just starting to cover very basic mathmatics at school, was unable to play with us using the rules provided. We ended up making up our own rules and had Ruby add up the results of two dice, instead of multiplying them.

We really liked the concept of trying to make learning and practising mental arithmetic fun, and I think this game will certainly appeal to adults and children who are interested in maths; however the game failed to hold my interest and is not really suitable for young children as indicated on the box. I think it is fair to say that my husband, who is quite mathematically minded (he is a software developer),  got the most enjoyment out of the game. Perhaps we will try playing it again in a few years when Ruby is a little older and is at the stage where she is learning multiplication in her maths lessons at school. We would however recommend that the manufacturer revises the age rating of the game.

The following rating is based on our experience playing the game with our four year old daughter.


Disclaimer: We were sent the board game for free to review, however all thoughts and opinions are our own.
Posted by Unknown at 20:03