It's hard to believe that just a few short days ago we were preparing to celebrate Christmas, and now the big day has come and gone. This year was a very different Christmas to years gone by; previously we would have Christmas dinner at my mums and then head off to visit my in-laws and then my father, but this year we visited Phil's family on Christmas Eve, spending the afternoon with them before coming home to bath the girls, get the snacks for Santa and Rudolph and heading off to bed. 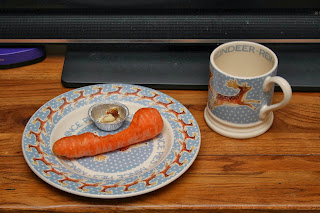 Christmas Day was a lovely chilled out day; it started at around 7:30 in the morning with me having to wake up the girls as they were showing no signs of waking up! Ruby was so very excited to see that her stocking was full up of pressies; Lottie on the other hand was not really too interested apart from the wrapping paper and boxes.

After all getting into our bed to open the presents in the stockings, we headed downstairs to see if Santa had left some presents under the Christmas tree. Ruby checked to see if Santa had eaten the mice pie and drank the milk that had been left out for him, which he had all bar a few crumbs of mince pie. Last year Santa had been left a biscuit but only managed to eat half, Upon noticing this, Ruby ate the remaining half of the biscuit! 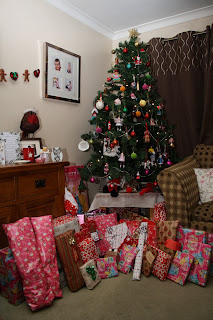 This year was the first year I have ever cooked a Christmas dinner and it was also the first time I have ever cooked a joint of meat! Two years ago hubbie bought me a beautiful rangemaster cooker in the hope that I would cook more, but to be honest it does not get the use it should. I tend not to cook a lot of meat, as I prefer vegetarian food. Hubbie was adamant he wanted a traditional Christmas dinner, so I cooked a turkey! I was worried in case I under or over cooked the meat, or generally just burnt everything, but I wrote down when things needed to go into the oven and I am incredibly pleased to say that it all came out so much better than I thought it would. 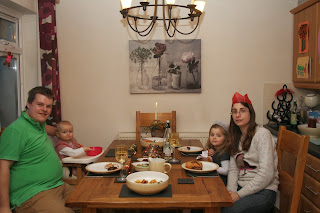 Christmas afternoon was spent being very lazy and chilled out, playing and enjoying our new pressies. It's hard to pick out what our favourite pressies were, but for Ruby it was her princess Sofia dress, Lottie loved her tea set that Ruby had decided to wrap up (it used to be hers).

There isn't really one pressie that sticks out as being my favourite as I've had so many lovely and thoughtful gifts, including a DAB radio, books, clothes and many more things.  I think Phil's favourites would have to be his new book or bottle of whisky!

I hope everyone has had a very blessed and enjoyable Christmas and I want to wish everyone a very happy new year.